The angry internet - A threat to gender equality, democracy & well-being 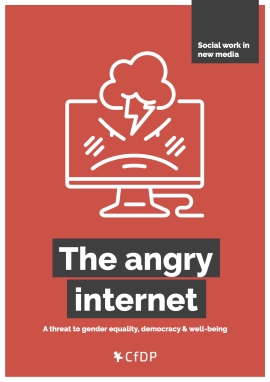 This report is based on an analysis of more than 100.000 unique posts and comments with misogynistic content on the online platforms 4chan, Reddit, and Twitter, and interviews with users and experts. It shows, that many of the men in the misogynistic groups are vulnerable and lack healthy communities as well physically as online, says co-author of The Angry Internet, specialist consultant in CfDY, Christian Mogensen:

“During the project, we’ve met many young men who’ve tried to put massive anger into words but have ended up talking about their vulnerability. Men who’ve created their own countercultures, because they’ve felt outside of the arenas, they saw everyone else fit into. They connect with each other, because they’re against the community, that they experience being left out of”

A threat to democracy
The report assesses that the risk of a physical attack committed by a nordic, misogynistic user is very little. But it also shows that the tone of the misogynistic groups moves to the more “common” platforms like Facebook. This can potentially lead to entire groups of society will abstain from taking part in the public debate online out of fear of hatred and personal attacks. According to the report, the solution is not as simple as closing down the platforms. For many users, the communities constitute the only support system, where they meet like-minded people.

The report points to among other things a big potential in preventing misogyny online by making more teachers, pedagogues and other professionals understand the platforms that house the misogynistic groups, and why vulnerable boys and young men are drawn to them.